Oh, Canada: The History of our Canada flag

With the upcoming lebration of Canada’s Confederation on July 1, we thought we’d take a look at the history and development of the iconic red leaf on white, the evolution of the manufacturing process—and the role that Scythes and Company, predecessor of Canadiana Flag, played in the process that developed Canadiana flag to where it is today.

How Did Canada Choose Our Flag ?

For many Canadians, the only flag they’ve ever know is George Stanley’s design, developed to honour the country’s Centenary in 1967. However, there is much more history behind the Canada flag.

In the beginning, of course, the country’s flags represented the colonial powers—England’s Union Jack, and France’s fleur de lys. (Quebec’s provincial flag has a fascinating history of its own, and was actually declared its official before the maple leaf. But that’s a story for another day.)

The Red Ensign followed the Union Jack, though it had primarily been used as a jack for naval purposes. On a red field, the Union Jack was reduced to the upper left corner (the canton), while the right side (the fly) was dominated by the Shield of Canada.

The Red Ensign evolved as well. King George granted Canada Royal Arms in the 1920s, celebrating her role in the First World War and as a burgeoning nation. Simpler than the design of the Shield, the Royal Arms more prominently features the fleur de lys and the three-leafed branch that would become the predecessor to today’s flag. The province of Ontario still flies a modified (or defaced, in vexillological terms) version of the ensign, replacing the Royal Arms with Ontario’s shield.

In 1925 and 1946, movements to establish a flag unique to Canada, but both efforts were quashed by federal governments—probably not coincidently steered by William Lyon Mackenzie King.

The drive for a flag regained steam with Lester B. Pearson in 1963. He vowed to have a flag by the Centennial, to give citizens a sense of nationhood. In the design he proposed—nicknamed the Pearson Pennant—the three-leaf branch on a white field was sided by blue bars at the header and fly. It was roundly rejected by the House of Commons. A Parliamentary Committee was struck, and given a six-week deadline to come up a design.

Canadians contributed thousands of designs to the committee, which selected three for the shortlist, Pearson’s design included. In the end it was Stanley’s design—a red maple leaf on a white field, surrounded by two red bars—won out. The red represents hope, prosperity, peace and neutrality. In addition, the maple leaf represents cultural heritage and Canada’s natural ressources.   Our predecessor Scythes and Co. contributed to making prototypes for considerations. Hence, the company took off and acquired years of knowledge in the flag making industry, which all contribute to how we manufacture our Canada flags today.

While screen printing can turn out volumes of high quality flags, our appliqué process delivers an elegant and durable banner. Because of the heavier weight of the fabric, it doesn’t flutter as much as its screen-printed nylon colleagues. Our appliqué Canada flag is rather known for its more ceremonial and rich appearance.

There’s a lot of hands-on work in an appliqué flag. It incorporates all traditional methods of the flag making process. Hence, our appliqué Canada flag represents a piece of timeless history living in modernity.

Our fabric is dyed vibrant red in comparison to being digitally printed. As a result, it gives a more long-lasting and bold Canadian red. It is engineered to diminish the fading process as well as preserve its signature vibrancy. Using an appliqué sewing machine, the pattern of the maple leaf and red bars are sewn in place. The excess material is cut away. Hems are double-stitched for durability. A tape header, through which the lanyard passes, is sewn to the canton edge of the flag, with a wooden toggle at the end. While the digital age has made some processes easier, there is still a lot of high-precision, hands-on expertise to bring this flag to life. After all, the textures and depth contribute to its lively appearance, which makes this particular Canada flag a favourite to display indoors.

We now offer our Canada Appliqué Flag with gold fringe for those looking for the extra dazzle. 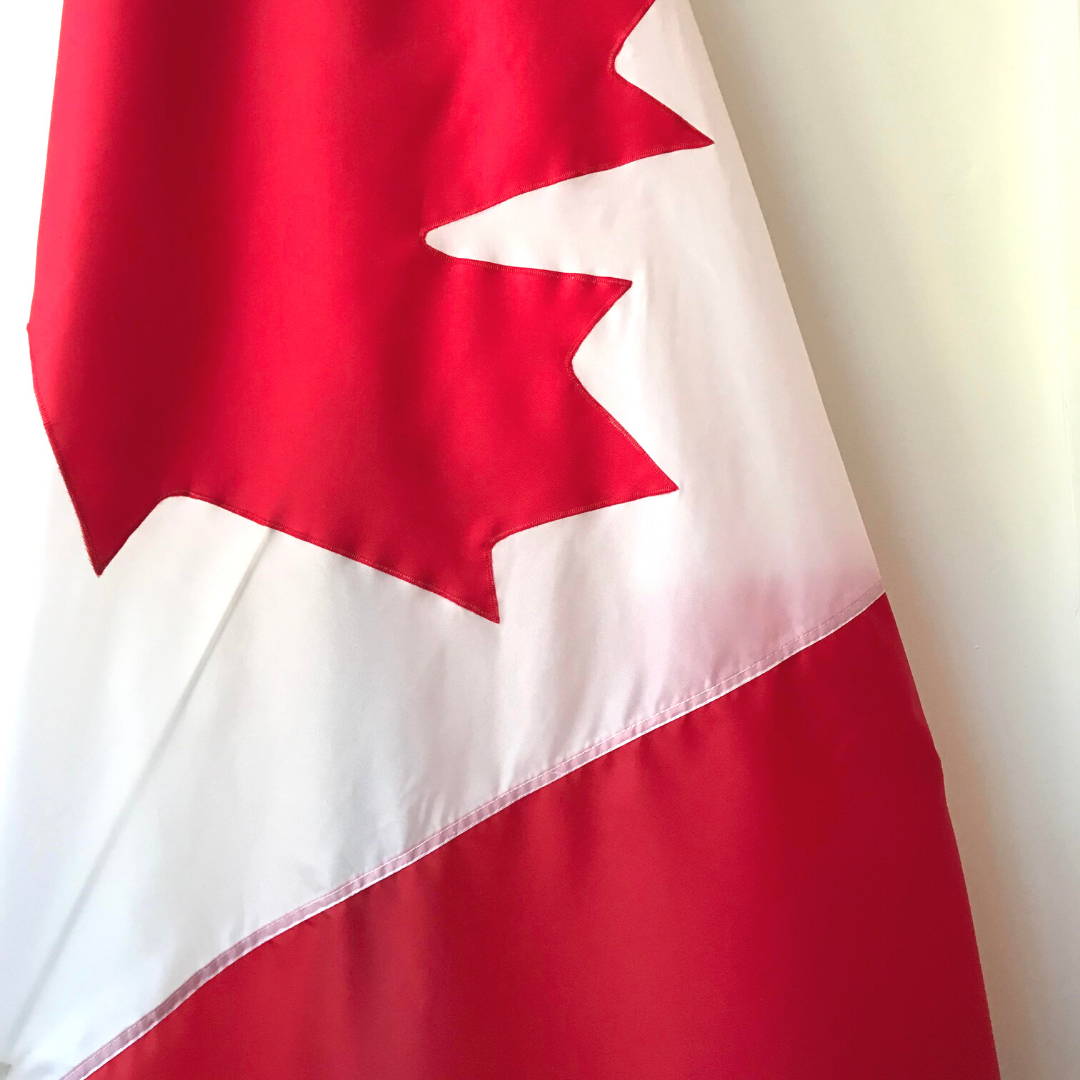 Happy Canada Day from Our Team at Canadiana Flag

At Canadiana Flag, we’re proud of that history. Our technology makes it much easier to produce quality flags on more co-operative synthetic fabrics, with automated machinery and screen print presses. But we still sew particular flags by hand as part of our, and our country’s, heritage.

If you’re feeling patriotic and want fly the flag of what you call home, purchase a thoughtfully made Canada flag from our Canada flags collection that is curated into a variety of different fabrics for the appropriate occasion.

All our Canada flags are made here in Canada. They are engineered to serve the right durability for the appropriate occasions. Whether you are looking for a Canada flag for home, the cottage, events or the office, each Canada flag we produce takes into consideration its longevity, and bold appearance that represents our nation.